Well, it's been an 'interesting' time lately. The past week has been all go. When I drove to work last Wednesday morning it was raining. I didn't think much about that, after all, it rains a lot here. When I got to the village of Burrowbridge I noticed that the river seemed uncommonly high. This happens from time to time because Burrowbridge (where Burrow Mump is) is quite a long way downstream on the River Parrett and any rain that's fallen in the south of Somerset can take a couple of days to get there. But the river really was very high, probably as high as I've ever seen it. That isn't so remarkable because if it had been any higher it would have been spilling over, so it would be really unusual to see it higher than it could possibly be. If you see what I mean.

Anyway, I continued on my way to work. When I got in there weren't many people around but there was still a bit of a bluster going on with people busy creating special webpages for all the flooding news. I had to get to grips with it all fairly quickly and help out, mostly by taking work off people so they could concentrate on getting the flooding news pages up. At the end of my working day I went home as normal. On Thursday it was still all going on, and more importantly, still raining. This time there were people around with tales of their struggles getting into work and the problems they'd had at home.

I should point out at this point that the photos I've used here are not mine. Mostly I've snagged them from the local BBC website. 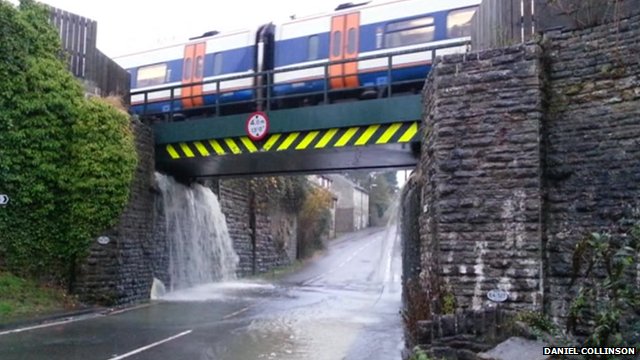 This railway bridge is in the south east of Somerset.

On Friday, again, I went into work as normal. As usual I left at lunchtime and, on my way home, I came to a bit of a grinding halt as the road I was using was under water. I got through but knew that I would have been one of the last to manage it, and indeed, it was closed by the time I got home five minutes later, according to the BBC website. 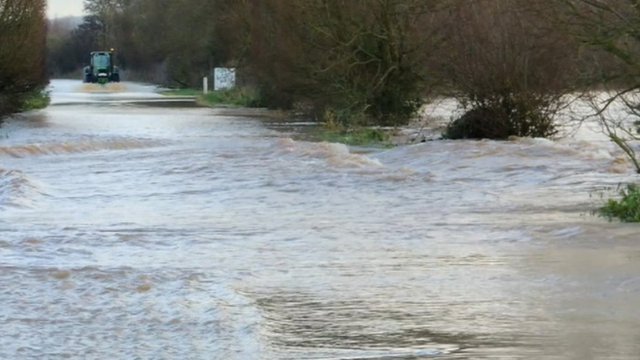 And this is that road, the one I normally use to get to work. It wasn't quite as bad as this when I drove through it on Friday, but it wasn't far off. I think I can see why they closed it.

On Saturday morning I decided that going to Taunton to do my weekly shop would need a detour through Bridgwater, and an even longer detour on the way home to avoid Bridgwater.

Monday morning, and by now you must understand we had had about 150mm of rain since Wednesday - all of it fallen on already really sodden ground from a wet spring, summer and autumn, and I thought I would give my usual way to work a bit of a go. I went over the bridge at Burrowbridge - the river was exactly as high as it was possible to be - to see a lake in front of me where the road should have been. Happily, I still had a couple of detour options and took one that I thought would be open. It was, though there were a few landslips and enormous puddles and running water along the way.

I was busy updating flooding webpages most of the day and saw discretion as the better part of valour for my homeward journey, so went the (very) long way round. Last night the road blockage came off of the BBC website, but the person I car share with didn't feel inclined to give it a go this morning, so we came to Taunton through Bridgwater again. I'm pretty sure it was clear earlier, but it looks like it's been closed off again now, so I think it will be the long road home again tonight. I hope it is finally opened up again soon, as the waters recede. 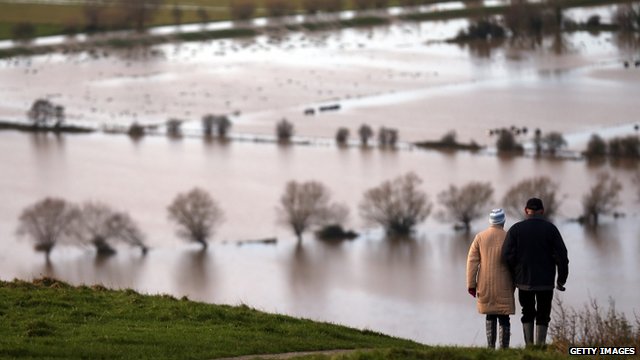 My beloved Somerset Levels and the way they look now. 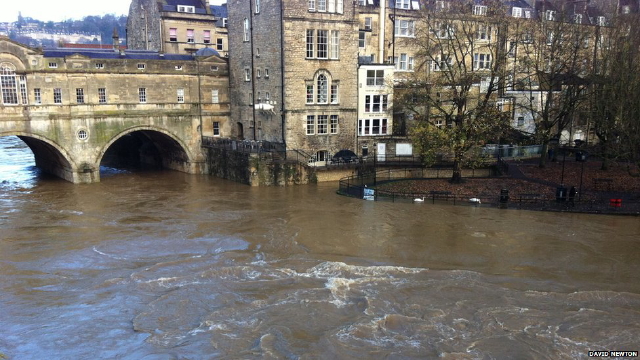 Many of you will recognise this scene. I'm sure a lot of you have stood near this spot by Pulteney Bridge and Weir in Bath. Well, it doesn't always look like this.

Having said all that, my inconvenience has been all very minor really and some people have had a real nightmare with homes being flooded, and serious disruption. A couple of people in Somerset have died in the floods and the high winds that came along with them. Most of the roads in the south-west have been impassable at some time or another and the emergency services have been flat out for days. Whole communities have been cut off and railway lines have been washed away.

It's stopped raining now, and it looks like things are slowly getting back to normal, but it's been quite a week.